I.  Say what you want about the faraway White House.  But watch what you say about City Hall and the people we elect to local government – they're practically family.

They live in our neighborhoods.  We have coffee with them when they're running for office.  We bump into them at the movies or supermarket.  We could hop a trolley downtown and collar them at work.  We elect them to work for us.

Their job is to pave the streets, limit what gets built on that empty lot around the corner, keep an eye on the police department, get the trash picked up, and make sure there are enough fire stations to keep us safe and good air-quality levels to keep us healthy and enough libraries and parks to help make us happy.

In sum, they're public servants whose job is to create and enforce policies and laws that improve the daily lives of San Diegans.  Their job is to take care of the city so we, the residents, families, taxpayers, students, and workers can get on with our personal pursuits and quotidian endeavors in safe and sound surroundings. 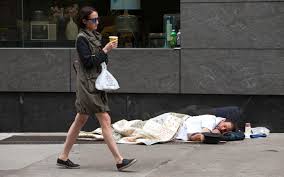 Sometimes they do a better job than they do at other times.  But who can deny that – when it comes to issues of homelessness-related health, safety, and welfare – the Mayor and City Council have flat-out failed.

II.  Let's say you're out shopping in your local neighborhood.  Or holding tickets
for the downtown Civic Theater.  Or inching around Sports Arena Boulevard and Rosecrans.  Or stuck in the bottleneck at Torrey Pines Road. You'll see clusters of homeless men and women (and occasionally little children) asleep on the sidewalks, or holding up cardboard signs soliciting funds (god bless), or hauling black plastic bags filled with personal goods, or rummaging through trash bins.  Some are drunk.  Some are arguing or mumbling or shouting at invisible foes.  Some are reading yesterday's newspaper. 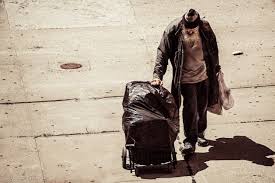 And even after you've handed over some spare change or a couple of bucks you might wonder, what else can you do? 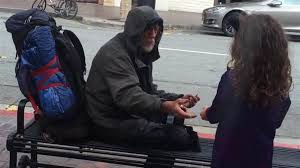 Who could you call if you want to do something more?  You might think, there must be someone in charge who has a plan to alleviate this glaring calamity.

So you turn to the people we elect to city government, the ones whose job it is to take good care of the city.

You go to the city website but you find nothing on the home page.  You try the link for InsideSan Diego and end up with a bunch of uplifting stories. You type "homeless" in the search box at the top of the main page and Eureka!  You see a link for homeless services and another link for homeless providers and plenty more links to news releases and police responses and the Mayor's press conferences.

You keep clicking, searching in vain to find out who is in charge.  You try 2-1-1 San Diego, the city's newest public resource.  You try the homeless shelter directory link.  The truth finally hits you: you have just entered the twilight zone.

III.  Let's say it for the record: there's no one in charge.  Not at our County, not in our City.  There is no regional, local, or comprehensive policy to address the needs, impacts, and future of the homeless people living on our streets, along our riverbeds, and in our canyons.

For three decades we've given lip service to the mission of the Regional Task Force on Homelessness to pull the pieces together into a utilitarian approach to ending homelessless.

Then someone masterminded the San Diego Regional Continuum of Care to take all the pieces and put them into a broad data framework.

And the United Way of San Diego County appointed their first "Commissioner" to place all the pieces in a coherent pattern that would meld housing and supportive services and permanently end chronic homelessness.

These regional efforts have been successful, indeed, in providing temporary subsidized shelter for unmoored politicians waiting for their next election gig to materialize.  But they've utterly failed to facilitate, create, or implement the crucial missing piece: a comprehensive, publicly-accountable policy and plan to address the size and scope of San Diego homelessness.

IV.  Dare we say it? Here at home, Mayor Faulconer has no plan.  Instead, he offers us tentative wishes.  He wishes to add some temporary shelter beds to the city's anemic inventory.  He wishes for a Housing Our Heroes program for 1000 homeless veterans.  He wishes to reunite homeless people with their families.  He wishes that voters would agree to increase the hotel tax (TOT) to pay for an ill-advised Convention Center expansion, street repairs, and homeless services (in that order). 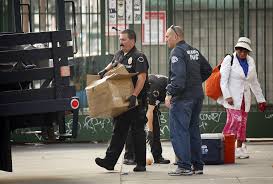 Then he wishes that his newly appointed communications advisor would fabricate a central intake center to hook up homeless people on the streets with various services (however inadequate, it would be a more benign approach than his previous actions to clear homeless people from downtown streets, round up their meager belongings, and lay jagged rocks under sheltering overpasses to prevent reoccupation).

He goes on wishing, but so far the tooth fairy has failed to alight.

V. But don't despair! There may be light at the end of this tunnel!  As it turns out, the city already has what it takes to do the job!

We could almost say we're loaded for bear.

VI. Train  your sights on the San Diego Housing Commission, established almost 30 years ago to preserve and increase the city's stock of affordable housing and be responsible for providing rental assistance and related housing services to low-income households.

Over the decades the agency has strayed from its original mission.  It sold off assets, engaged in property investment and development, favored market-rate ("workforce") over low-income housing, artificially sweetened the pot for some in the nonprofit housing industry, snookered the city council about financial activities and intentions, failed to halt or even keep track of the destruction and non-replacement of affordable housing, and evaded public oversight.

A solid case could be made to dismantle the Housing Commission.

A more positive case should be made to reform and restructure the agency and transform it into the city's one-stop-shop, a designated and responsible public-benefit city department with sufficient resources to create public housing and coordinate services and programs for the widest spectrum of San Diego's lower-income and homeless population.

We can escape from the labyrinthian twilight zone by putting a renewed Housing Commission in charge.  Run it by your elected representatives.  Let's see what these public servants – the ones who are so close they're practically family – are really made of.
Posted by ndamashek@ucsd.edu at 7:57 PM