What would Nancy Drew do? 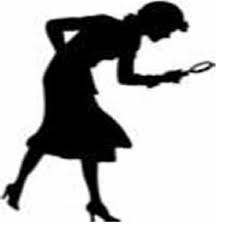 Calling all sleuths!  There's a murky mystery afoot in the city of San Diego that feels oddly familiar.  In theme… plot… cast of characters… it's nearly a dead ringer for a sordid drama that took center stage in our city a few seasons ago.

This new case involves an attempt to bump off a local labor leader, someone most San Diegans probably wouldn't recognize if they saw him in a picket line.

According to a description provided by his associates, the targeted individual is an unshaven, intimidating, middle-aged man with a budding paunch, contentious personality, rough temper, and not-such-great looks.  The perp (aka "dirt bag") is currently in the public square being scourged and pilloried. 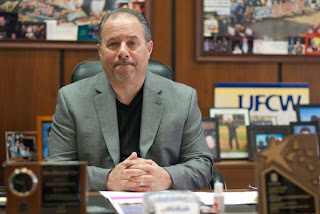 This past December two lawsuits were filed against Kasparian, one for sexual harassment that spanned a 15-year period, and the other for gender discrimination.  A third complaint has recently surfaced, this one alleging political retaliation.

The word on the street is that – when confronting a marauding menace – the good citizens of San Diego have the right to settle certain scores with frontier-style justice.  Never mind a person's constitutional right to due process.  Never mind tedious legal procedures.

Borrowing freely from the Republican playbook (lock her up! lock her up!) some citizens want to see Kasparian lynched.  Other citizens would settle for immediate banishment from his union job.  Others call for excommunication from the ranks of the Democratic Party.

I've never met the man.  I have no insider information about his behind-the-scenes conduct in the labor union universe, but I do have some questions:

Has Mickey Kasparian been doing a good job as labor leader?  I haven't heard, one way or another.

Does Mickey Kasparian engage in illegal or criminal activity?  He hasn't had his day in court yet so I wouldn't know.

Is Mickey Kasparian so obnoxious, uncouth, arrogant, and ineffective that union members should vote him out of his top-dog position?  That's up to them, I would think. 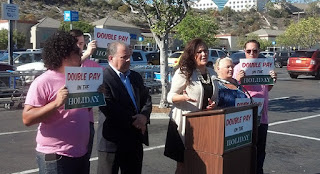 Another thing I know is that Mr. Kasparian is no novice in the political chess game.  Maybe you've seen him at pro-labor events standing in unity alongside state assemblymember Lorena Gonzalez. 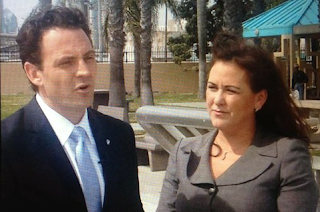 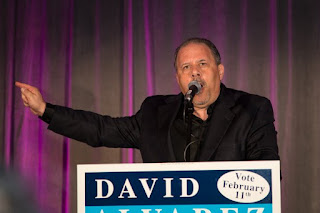 And maybe you noticed that Kasparian put his money on David Alvarez in that mayoral race.

But did that prevent him from turning his back on councilmember Alvarez in the recent skirmish over who would become this year's city council president? 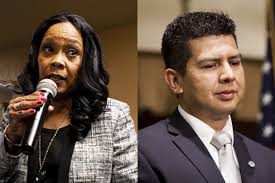 One thing you can say about Kasparian– he's got an unusual way of making friends.  And unmaking them.  Do we detect more clues to what has put him center stage in the current well-orchestrated facsimile of a kangaroo court?

So tell me, what would Nancy Drew do with these clues?

Posted by ndamashek@ucsd.edu at 6:39 PM

Mayor Mayor on the Wall

We'll start with a trick question: Is Mayor Kevin Faulconer the mirror image of President Donald Trump?  No, of course not! you'd probably say.

"…born and raised in Oxnard California… learned to speak Spanish in grade school…  San Diego State University… member of the Kappa Sigma fraternity… one year as Student Body President of Associated Students. He and his wife Katherine, a small business owner, live in Point Loma with their two children. Before running for office… executive with the public relations firm NCG Porter Novelli and volunteered  on the Mission Bay Park Committee…" (see Wikipedia)

You might say that Kevin Faulconer is a lightweight Republican who goes down nice and easy in a city like San Diego.  He is decorum incarnate – never an unguarded sneer, never an unscripted rant.

You might even say that he mirrors Melania Trump more than the Donald.  Melania's insouciant aura serves as a glamorous distraction from her husband's crude and reckless nature.  Likewise, Faulconer's low-keyed persona serves as a disarming distraction from the leadership vacuum on the 11th floor of City Hall.

Kevin Faulconer's problem is that he's an embarrassment to his constituents.  For how many years did the Spanos syndicate manipulate and extort this mayor?  How many times did they slap him silly while he kept coming back for more?

But Faulconer's problems go far deeper than being dumped by the Chargers. We've got a mayor who is incapable of taking clear, decisive stands on big civic issues, whether it's a sports stadium, or Convention Center, or racial profiling by city police officers, or actualizing strong environmental programs.  He walks on eggshells, even over keeping our police force out of the immigration enforcement business.  He shuns the stage at city demonstrations and marches.  Ribbon cutting events, that's where you'll usually find him.  (So who can explain why he ignored public outcry and readily mounted the stage to meet and greet at the super-conservative American Legislative Exchange Council (ALEC) conference held in San Diego a couple of years ago?)

We've got a mayor who, since the day he stepped into office, has neglected the city's festering problems of relentlessly worsening homelessness; rising poverty levels; looming budget cuts; a housing crisis that turns rent and mortgage payments into a monthly scramble…

We've got a mayor who issues limp declarations of Action! Accountability! A New Day in San Diego! in response to the ballooning backlog of street and road repairs, or spiking pension obligations and chronic threat of municipal bankruptcy, or burst water mains and standstill traffic in already overburdened neighborhoods (laughably slated for increased density and development).

In his latest State of the City address the mayor's to-do list is a hodgepodge of sound-bites.  But where are the concrete remedies?  For him, Action means making the city an Official, Regional Autonomous Vehicle Pilot Location.  For him, Accountability means installing jagged rocks under freeway overpasses to get rid of homeless sleepers.

For him, A New Day in San Diego! might mean the Camp Hope approach of clearing the homeless off the streets and stowing them in a tarted-up tent city at the Mexican border, out of sight and out of mind.  Will this mayor really give his blessings to our very own Hooverville?

We've got a mayor who has not delivered the goods.  Pleasant though he may be, he lacks the independence, imagination, backbone, and political moxie to do right by our city.

Once upon a time when I was an active player with the League of Women Voters, the powers-that-be convinced the San Diego public that it was time to become a dynamic metropolis like Los Angeles or Chicago or even New York City.  So voters agreed to replace our purportedly provincial city manager form of government with a strong mayor system.

Back then the big worry for the LWV was that – in a politically low-energy city like ours – concentrated power in the hands of a strong mayor would decrease public accountability and invite corruption.

Back then we also worried about how trading in an independent, professional city manager for a political appointee to run city departments, operations, contracts, budgets, and workers would work out.  Turns out we were right to worry.

Our first "strong mayor" was Jerry Sanders.  He never succeeded in being his own man.  During his two terms in office he dutifully kept the city exactly where it had always been: in the hands of an ossified downtown fraternity of hoteliers, developers, bankers, and assorted business interests.  He persists to this day as a well-compensated mouthpiece for the Chamber of Commerce.

Our second "strong mayor" was Bob Filner.  He was willing and able to express his independence, imagination, backbone, and political moxie to promote a politically liberal agenda for the city.  But he proved too undisciplined for his own good.  And too threatening to old-guard Republicans.

As it turns out, he was also too threatening to self-professed progressive Democrats like then-councilman (and current California state assemblymember) Todd Gloria and then-San Diego/Imperial Counties Labor Council secretary-treasurer (and current California state assemblymember) Lorena Gonzalez and her clandestine mayoral ambitions for then-close companion (and current husband) Nathan Fletcher.  In an unprecedented palace coup, the city's first bona fide strong mayor was unceremoniously drummed out of office.

Our third "strong mayor" is Kevin Faulconer.  He's a chip off the old Sanders block.  We are back to waiting for the basic benefits promised to us when we gave up the old city manager government and brought in the strong mayor system – things like transparency, accountability, government efficiency, and dynamic governance. 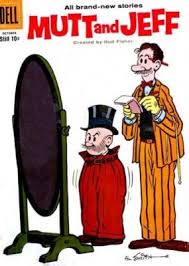 We'll wrap up with the trick question: Is Kevin Faulconer the mirror image of Donald Trump?  Of course not! you'd probably still say. There's a world of difference between a public relations puppet and a dangerous, unstable, bullying megalomaniac.

Here's the big difference: our mayor is within reach, right at our fingertips.  We elected a "strong mayor" to be in charge, to be accountable, and to be responsible for what goes on in our city.

We voters need to check our own mirrors, if only to remind ourselves that we elected our mayor to do right by our city.  And it's our job to hold his feet to the fire and not let him forget that HE is where the buck stops.
Posted by ndamashek@ucsd.edu at 6:02 PM