San Diego is led around by the nose 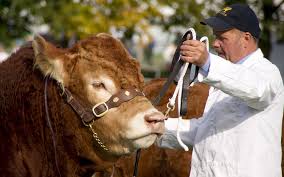 How about taking a break from our city's inane preoccupation with a behemoth sports palace for the San Diego Chargers?

And let's give ourselves a break from the fiasco called a "Convadium," a zany proposal to link a convention center annex to a new football stadium just down the street from our 18-acre ballpark.  Talk about blocking pedestrian access! Talk about walling off the heart of downtown!

What self-respecting city in the USA would fall for such a ludicrous proposal?

So let's NOT to take a break from simple questions like: Why are we even thinking about cramming a mammoth new football stadium into our modestly-proportioned, pedestrian-starved downtown streets?  What rational person would want to do such a dumb thing to our city?  Are we nuts, or what?

And while we're at it, how about taking a clean break from convoluted (fraudulent?) financing schemes involving hotel taxes and bonds and subsidies and giveaways that inevitably come back to bite San Diego taxpayers and residents?

Think back to the last John Moores promise to San Diegans that his "more than a ballpark" would pay for itself.  Turns out we were sold a bill of goods.  Hotel taxes (TOTs) notwithstanding, the city is bleeding millions of dollars of public money out of the General Fund to pay off Petco Park debt.  "More than a ballpark" turned out to be more of a ripoff – a financial net loss for the city.

Which means let's take a break from signing any ballot initiative or supporting any ballot proposition that calls for, encourages, or in any way facilitates the erection of another downtown sports stadium or massive downtown "Convadium."

Surely we all deserve a break from San Diego's heavy-hitters and influential manipulators and major league players who've been leading us around by the nose and knocking us silly with their concussive games of power and greed.

This brings us to a related matter – though (and I hope you'll bear with me) it may be hard to prove (beyond a reasonable doubt) the connection at this very moment.

You may have noticed that last week, on the 6th floor of the San Diego Superior Court Hall of Justice, in the courtroom of Judge Timothy Taylor, 12 jurors in a court of law dismissed sexual harassment and battery charges lodged by a city parks worker against former mayor Bob Filner.

It turns out – according to last week's jury – that suing a mayor for giving you the creeps, for taking hold of your hands, for casting a leering look in your direction, or for putting his arm around your shoulder (even if it startles you) doesn't necessarily add up to a hill of beans.  The jury didn't think it warranted an award of half-a-million dollars, though the accuser and her lawyer did.  Not even one dollar, as it turned out.

Does it make you wonder whether other San Diego juries might have dismissed the piling-on of sexual harassment and battery charges leveled against our former mayor, had they been given the opportunity to hear all sides of the story?

Does it make you wonder if there's a bigger, juicier, more intriguing story behind the multiple accusations that led to the ignominious ouster of former mayor Bob Filner?

Does it make you wonder how high were (and are) the stakes for the city's heavy hitters and influential manipulators and  major league players that they had to force mayor Filner out of office ASAP?

And doesn't it make you wonder whether the full Filner saga – still waiting to be told – is destined to be an eye-popping exposé, a high-jinx blockbuster, a surprising political thriller... featuring the finest of San Diego's political and business stars in the lead roles?

Meantime, while we're waiting, regular San Diegans can keep track of the saga of the San Diego Chargers in the comics section of our daily newspaper.

Posted by ndamashek@ucsd.edu at 7:56 AM