Part I: Complete Communities
Over the past six months, the international scientific community has been working its tail off to subdue the coronavirus scourge wreaking havoc on the world population.

Meantime, Americans are taking to the streets demanding the annihilation of other malignant viruses infecting our nation--namely, racist violence by the police and the embedded racism that underlies too many of our country's institutions.

How are San Diego leaders responding to this pandemic moment of economic, political, and life-threatening upheaval?  The answer won't make you proud.  It could make you angry. 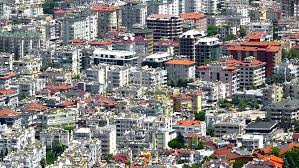 Throughout these past months of social turmoil, racial reckoning, and a deadly health crisis,  San Diego's Mayor-- along with city planners and the development industry--have laser-focused their efforts on fast-tracking an extraordinary proposal called "Complete Communities: Housing Solutions and Mobility Choices Initiative" which:

The Complete Communities plan purports to diminish the city's greenhouse gas emissions while it fixes the dilemma of housing unaffordability, and will also:

And how will this urbanized Garden of Eden be created?  By enabling multistory redevelopment, substantial population growth, and high densities in neighborhoods and communities throughout San Diego.

The proposal has a magic wand that will eliminate "regulatory barriers" like existing zoning regulations, height and setback restrictions, environmental analyses, and community review.  And ABRACADABRA! a bucket of fairy dust that will guarantee generous financial incentives to builders plus a license to build whatever they see fit to build, whenever and wherever they are ready to build it.

Part II: Incomplete Communities
You may be wondering why you have never heard of this transformative political initiative to rebuild the physical, social, and--indeed--the racial identity of our city.

It's because Complete Communities was conceived and gestated in private--no citizens' committee, no speeches from the Mayor, no open workshops, no publicized opportunity for your input, questions, or concerns.

There's no other way to say it: Mayor Faulconer has betrayed San Diego voters by handing over control of our city's future to the region's business/builder/growth industry--with the complicity of gullible YIMBY acolytes.

And you--whether homeowner, renter, citizen, resident, or taxpayer--are not only expected to put on a facemask, your Mayor is also counting on you to don a gag and blindfold when it comes to shaping your neighborhood's future and the city's fate.

But the most egregious betrayal of all is that—at root--Complete Communities is a government-sponsored racist proposal.

Why do I say that?  Consider this:

The truth is, Complete Communities it designed to meet more of the economic needs of the development industry than the need for adequate, affordable housing for the city's "diverse group of workers" and for other essential sectors of our population

As for betrayal, consider this: During the postwar decades following World War II, the federal government provided loans, subsidies, and enabling legislation to developers to build extensive tracts of housing on the outskirts of existing cities. 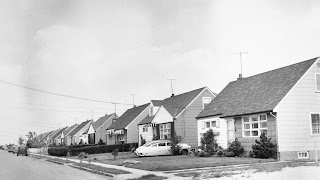 Fast forward to 2020.  The Complete Communities proposal, with its mandates for vigorous urbanization of San Diego neighborhoods, flips the proverbial American Dream of Suburban Paradise on its head.  That's not necessarily a bad thing.

As envisioned by the Complete Communities proposal, the overriding majority of new construction falls into two categories:

a) high-end "luxury" apartments, and

b) micro/mini/small studio and one-bedroom units.

The proposal uses a complex formula for creating "affordable" apartment units but the numbers come nowhere close to meeting the actual housing needs of our city's population (take another look at SANDAG forecasts).

The formula also avoids the reality that dense redevelopment throughout the city clears away existing affordable housing and displaces families and individuals who now occupy them.
And is it impolite to point out that the formula aims for an indecently scant number of family-sized housing units considered affordable to moderate/ low-income households?

Bottom line
Complete Communities should be jettisoned. Once the pandemic dust settles, once we can go eye to eye with our elected officials, that's the time for a thorough airing of fresh proposals to map an equitable future for San Diego.

Posted by norma damashek at 2:40 PM