Progress, San Diego style: Where more gets you less

I've lived in San Diego long enough to remember what things were like "way back when."  And you know what?  Not that much has changed! 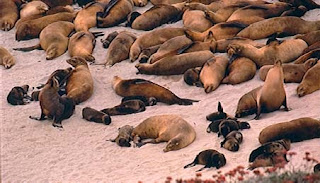 
There are also many more sleek highrises downtown (but, oddly, fewer pedestrians on the sidewalks than you might expect – a mere fraction of what you'll find in other urban downtowns).

You'll see many more homeless people sleeping on the streets.  Not so many as in New York or Los Angeles but substantially more than in D.C. or San Francisco or Chicago.
Also true is that nowadays you'll find much more political clout embedded in the office of our mayor – a result of charter changes finalized five years ago.  The new strong mayor governance system has great potential for making progress toward the goal of increasing the public good.
But in the world of San Diego politics there's a flip side to everything, including "progress."
As it turns out, at this moment in our city's history we find ourselves saddled with a retrograde mayor – a former public relations professional masquerading as a public servant while pandering to the financial wellbeing of the Chamber of Commerce/ real estate industry/ good-old-boys-fraternity.
It would be a good idea to keep close tabs on this evasive mayor, given his tendencies to abuse his strong-mayor authority by promoting private development interests over citywide and community interests.
In fact, mayor Faulconer's recent questionable use of the city's public TV channel to lobby against state legislation curtailing the undemocratic overreach of Civic San Diego (a private real estate development corporation created by Jerry Sanders to preserve and enhance the city's outlawed Redevelopment Agency) erases the line that should separate legal mayoral responsibility from unethical, self-serving political expediency.
Coverage of Civic San Diego in some local news outlets insinuates that "organized labor" is behind the attempt to rein in the tentacles of the mayor's privatized redevelopment organ.  But in fact, the interests of regular San Diegans and their rights to community participation, representation, neighborhood protection, political accountability, and open and transparent decision-making within their own neighborhoods are threatened by Civic San Diego and the mayor's lobbying on its behalf.

And it's the people's investment in good government that gets abused each time the mayor brandishes his public relations wand to fund and promote a nebulous public/private creation called One San Diego – its branded logo stamped on both the official city website and also on a private nonprofit corporation that he, his wife Katherine, and the former councilman Tony Young are or aren't really  in charge of – depending on when and whom and why you ask.
Is it just sloppiness and incompetence that causes the lines and boundaries of this mayor's agenda to be slippery and blurred?  Or is the public being massaged into passivity and submission by an adroit PR executive who's got inflated political ambitions?  To repeat myself: it would be a good idea to keep close tabs on this evasive mayor...
As for the question, how much has changed in San Diego since "way back when"? here's what we've seen: many quantitative changes on the outside but few qualitative reforms on the inside.  And when you look around to the right and to the left of the political landscape you'll probably agree that the prospect of real progress in our city is not yet in the offing.

Then again– if and when ethical, strong, and reform-minded leadership emerges in our city – the outcome will be more enriching, constructive, and rewarding than what the self-serving, fossilized San Diego establishment has ever provided... at least from the public perspective.

Posted by ndamashek@ucsd.edu at 8:11 AM