To the victor belong the spoils 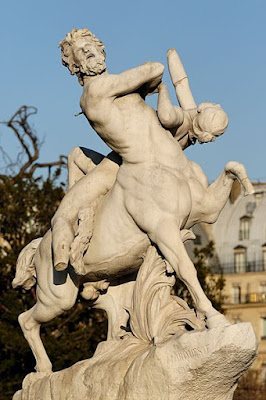 What is it about brute force and macho swagger that mesmerizes so many people?

Picture this: you're at a crowded carnival.   See that big beefy guy up on stage – the one with bulging pecs and thighs like a steel vise?  Watch as he picks up that mallet, swings it high overhead, and smashes it down – smack on target.  The bell at the top almost shatters with a ringing endorsement of this big tough guy.  We all cheer.

Picture another carnival.  Onstage is an international lineup of muscle-flexing politicians.  See the iron-fisted man of steel Vladimir Putin? the vicious hanger-on Bashar al-Assad? how about the take-no-prisoners Kim Jong-un?  And whoa! there's a joker in the pack – the one with a muscle-bound mouth.  Could it be the Donald, our very own wild card?  Even he gets cheers.

Now picture a different carnival setting.  Let's make it city hall in sunny San Diego.  Man-o-man, the politics on this stage are a feminist fantasy come true – not a grandstanding, fulminating, intimidating, testosterone-laden blowhard in sight (at least, not since Papa Doug Manchester pulled out at the U-T).

For proof, just look at our mayor Kevin Faulconer – one of the most genteel, photo-ready manikins ever invented by the public-relations industry.

This gentlemen's gentleman has managed to convince San Diegans that nothing out of the ordinary – nothing unseemly – goes on in our city (give or take some boys-will-be-boys antics over a new billion dollar downtown football stadium).

But the fact is, there is something unseemly going on. When Kevin Faulconer became the city's heir apparent following the not-so-bloodless coup that rudely exiled mayor Bob Filner, the spoils of that peculiar political battle were immediately deposited into the hands of San Diego's old guard – the city's business-as-usual, self-serving, elite club. 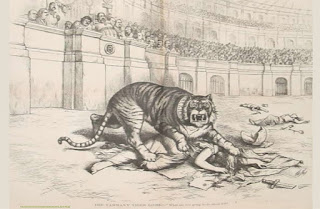 The problem is, the political spoils happen to be us… you and me… residents and voters… neighborhoods and communities... the city's future.

But – to the victors – the public voice is a nuisance.  Bad for business. Expendable.

Sure enough, a process has been set in motion that overrides, marginalizes, shoves aside, and manhandles the San Diego public by systematically eliminating city laws and procedures that once guaranteed the public right to be heard.  And honored.
Rape is not quite the word for it.  Let's call it a violation of the public trust.  It involves the methodical dismantling of years of progress by neighborhoods, community groups, and dedicated public advocates who once worked alongside city officials as partners to promote good public policy and better decision-making.
Could it be that those "strong mayor" naysayers had a point, after all?
Here's a short list of civic assaults, with more to be exposed.

Government accountability to the public has all but disappeared.  The proverbial buck stops nowhere.  In fact, it seems that no buck exists anymore.

Then there's the process called Charter Change, which voters will confront this November on an obscenely long and complex election ballot.


Then there's the blatant reality that we have no coherent policy or plan to ameliorate our mushrooming homeless population.

Then there's the careless support for a multi-headed "citizens" ballot initiative, created behind the scene by a select few – in the absence of public debate or input – that would rearrange huge tracts of land in Mission Valley and downtown, along with creating an ungovernable hodgepodge of private spheres of influence.  (Ironically, support is coming from groups that pride themselves on government openness and transparency.)

Then there's the disappearance of a well-functioning, adequately-funded planning department, staffed by city planners who were once permitted to put the public (neighborhoods, communities) interests first.

Then there's the Balboa Park - Laurel Street Bridge imbroglio that denies public participation in the decision-making process governing major structural changes to one of our most treasured public assets.

The list goes on.  But let's end, for the moment, with a cautionary political truism:  If you're not at the table, chances are you'll end up on the menu.

Which means if we, the public, don't demand to be seated at the victors' big-boy banquet... we're lunch.

Posted by ndamashek@ucsd.edu at 3:45 PM