Readers take note:  Sex, lies, and videotape is a 3-part commentary.  If you’re short on time, consider reading PART I today and PART II and III tomorrow.
PART I
Lies and Videotape
Does anyone out there remember the doomsday cult called Heaven’s Gate -- UFO-believers led by Marshall Applewhite and Bonnie Nettles, aka “The Two,” aka “Te and Do,” aka “Bo and Peep”?  Heaven's Gate cult members were ascetic “vehicles” on a journey to the “next level.”  Their shared delusions and willing submission to authoritarian leaders came to a shocking end in a tragic group suicide.  This happened in 1996.  Only videotapes remain, documenting their stay in and departure from San Diego.
Yes, truth can be stranger than fiction.  But if you think it can’t get even stranger, consider this: we’ve got another Hale Bopp scenario on our hands.  This time it involves billionaire corporate investors with an anointed “vehicle” who happens to be running for mayor of San Diego.  This could be the plot for a 3rd rate horror film but I'm afraid it's real.  Here's what's going on:
A group of of multi-million/billionaires -- well-known for their anti-tax, anti-government, anti-labor, anti-regulation, anti-pension, anti-public, anti-environmental, pro-privatization proclivities -- have targeted the city of San Diego for political takeover.  Their goal is not greater efficiency or raising the standard of living.  Their goal is to transfer the control, ownership, and wealth embedded in the city's valuable public assets straight into private corporate hands.  Their goal is a new world order.  Their goal is to use San Diego as a launching pad.

This radical group includes familiar names in the national news -- Grover Norquist, the Koch brothers, Newt Gringrich, Virginia Thomas (wife of Supreme Court Justice Clarence Thomas), Karl Rove, Dick Armey, the Heritage Foundation, Reason Foundation, CATO Institute, and Americans for Prosperity.  Bringing up the rear is our very own Doug Manchester.
Their shared philosophy is part anarchist, part Machiavellian, part domino-theory, and weirdly-Maoist: conquer the countryside (San Diego) and watch cities across the nations tumble.  To echo Carl DeMaio, “If we can show ‘reform’ in San Diego, it becomes a model nationwide."
That, in a nutshell, is what’s at stake in the Carl DeMaio / Bob Filner race for mayor.
Sex and Videotape
San Diego leaders are a conservative but non-radical group of entrepreneurs (I’m referring to the tightly-held inbred consortium of bankers, real-estate developers, hoteliers, law firms, lobbyists, and other political intimates who have historically ruled the city’s roost).  They’re sophisticated when it comes to running home town politics, but when it comes to the tantalizing, reckless, greed-fulfilling bag of tricks offered by big-time billionaire investors, they’re goners.
Even the bunch of up-and-coming San Diegans who swear they’ve seen the light and moved to the middle (the next level?) swoon when they get a glimpse of billionaire fantasy videos with titles like: Private control over public property. New ways to screw city employees.  Corporate dominance.  Voter submission.  Retooled performance standards.  Hands in the public pocket.  Pay to play…
Lies
About ten years ago Carl DeMaio was sent to San Diego to implement a right-wing takeover.  A stand-in for Bo, he was programmed early in his career to believe that government is the enemy and should be shrunk small enough to “drown it in a bathtub.”  Under the guise of cleaning up city government he went to work dismantling San Diego employees’ labor unions and privatizing city government services.  He called his plan Roadmap to Recovery. 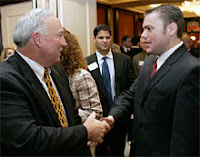 Carl DeMaio is relentless and talented at capturing public attention.  His ambitions and abilities must have looked like promising qualities to his Washington D.C. and radical right-wing mentors.  Even his personality quirks (robotic demeanor, evasive responses, dexterity at conflating truth and fiction, bullying threats to people who cross him, volatile temper) may once have been considered ammunition to speed along his takeover assignment.  Financial backing from superPAC funders, on top of his considerable personal wealth (by the age of thirty DeMaio could boast, "Don't people know I'm a man of means now? I drive a BMW!") have been greasing the skids in his run for mayor of the nation’s 8th biggest city.
But the fickle finger of fate, aka mischievous cupid, pointed its arrow in the direction of Carl DeMaio.  And here’s where the story takes a sharp downward turn.  Here’s where the sex, lies, and videotape get personal.
PART II
Sex, Lies, and Videotape
For the past few years the man who would be San Diego’s highest elected official has been leading a bifurcated life.
In public, Carl DeMaio remains a populist avatar of fiscal rectitude and righteous tea-party values.   In private, DeMaio is now the live-in mate of the publisher of San Diego Gay and Lesbian News and SD Pix magazine.  This partner is a controversial and successful videographer and photo cataloguer of social and party events in the gay community, a go-to man.
This is not a casual relationship.  Carl DeMaio and his partner have shared ‘promise rings.’  They share DeMaio’s home in Rancho Bernardo.
It’s fair to ask whether the domestic details, background, and activities of a candidate and his/her live-in mate should be revealed to voters.  If they are public figures the answer is clearly Yes.  History tells us that domestic partners of politicians often have significant influence over their mates’ decisions and careers.  Consider Arnold Schwarzenegger and Maria Shriver.  Mindy and Nathan Fletcher.  George W and Laura Bush.  The Clintons.  Ike and Mamie Eisenhower.  Nancy Reagan and Ronald.  Standards apply to gay and straight couples alike, in national, state, or local office. 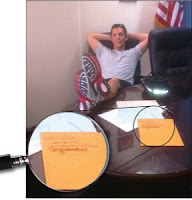 In a Facebook photo, DeMaio’s partner is shown lounging in a city council office while the council member is upstairs at a council meeting.  The LGBT Weekly asks an important question: “In addition to what role Johnathan Hale would play as San Diego’s first “first gentleman” to a gay mayor, is the question of how sound are Councilman DeMaio’s powers of judgment?"  The article points out that the "photo...depicts Hale seated at a table in the councilman’s conference room. On the table is a folder labeled ‘confidential.’ It’s impossible to know what the envelope contains. But it is possible to ask how appropriate it is for a husband, wife, boyfriend or girlfriend of an elected official to have easy access to sensitive information in the official’s office.”
A May 24th article in the LGBT Weekly discloses other equivocal information about the checkered past of DeMaio’s live-in partner: “As LGBT Weekly has confirmed, it is a story that includes alleged violence, admitted theft, burglary, as well as multiple name changes and restraining orders against Hale (filed against him by former “roommates” for domestic violence).”
If his troubled past were cleanly behind him, that might be the end of it.  But current public accounts tell a different story of  DeMaio’s partner, who has been called out by Nicole Murray-Ramirez, a well-known leader in the gay community, as a “pit bull of negativity, ugliness and pettiness…a snake.”
PART III
6 Lessons of Heaven’s Gate

Forget Heaven’s Gate.  Never mind Hale Bopp.  Real history is in the making with this year’s mayoral election in the city of San Diego.

Posted by ndamashek@ucsd.edu at 4:26 PM

I don’t know how the City Council hearing on the Balboa Park/Jacobs bypass bridge, scheduled for Monday afternoon, will end up.

I don’t know how many people will show up to support the Jacobs plan and how many will be there to condemn it.

I don’t know what the final vote will be if, indeed, there is a final vote.

But this I do know.  We’re getting exactly what we should expect to get when private business is brought in to solve a public problem.

Irwin Jacobs has been at the receiving end of criticism, potshots, and denunciation since he stepped in to take care of traffic and parking problems at the Laurel Street entrance to Balboa Park.  But it’s misplaced fury.

It reminds me of the first time the cat deposited a dead bird on my kitchen floor.  The kids yelled at poor pussy, berated her, told her she was bad.

But I picked up little puss (after I got rid of the feathered remains) and explained to my appalled kids that our cat was just being a cat.  That’s what cats do.  They catch birds.  They’re so proud of themselves when they catch a bird.  Our puss was being true to her nature.  She was a cat.

So it is with businessmen.  The successful ones (and who can question the business acumen of Irwin Jacobs?) are good at solving problems.  They solve problems not your way, not my way.  They do it their way.  Nothing wrong with that.

Do you want to know what’s wrong?  The mayor, or some big kahuna in the mayor’s office, took a public problem and put it in the hands of a private businessman.  The mayor, or whichever kahuna it was, had no right to do that.

The mayor is a publicly-elected official who has the responsibility and obligation to take care of public issues through well-established public processes.  That’s what the city charter, the municipal code, and state law say.  That’s what regularly-scheduled official public meetings are for.  That’s why we call elected officials public officials...public representatives.

Private businessmen don’t have to ask the public how to solve their problems.  They should not be asked to solve our (the public's) problems.

Mayor Sanders and whichever underling had the temerity to invent a last-minute legacy project to memorialize the mayor's wasted terms in office are the ones who deserve a hearty round of catcalls and hisses.

They bear sole responsibility for privatizing what should have been kept in the public realm and resolved through a public process.

The moral of this story?  Public is public and private is private.  Don’t get them mixed up.  Government belongs in public hands.  Business belongs in private hands.  It works best when we stay true to our natures.
Posted by ndamashek@ucsd.edu at 10:23 PM