ACT II: A Cautionary Tale About What a Council Member's Negligence, Lack of Independence, Inept Management, and Behind-the-Scenes Manipulation Can Do to a City

Scene One: Setting the stage for the winners… and losers 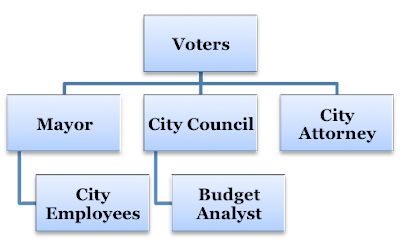 There's no denying it--life feels out of control nowadays.  Upended.  Throw in the national political scene and it's enough to push you over the edge.

But gird yourself for some good news.  Here at home we're blessed with the extraordinary opportunity to seize control of San Diego's political destiny.  It’s no exaggeration.

The person we choose as our next mayor (Barbara Bry? Todd Gloria?) will shape the quality of daily life for more than 1½ million San Diegans for years to come.   Which one can we trust with the power to control who gets what in our city… who benefits from the policies, decisions, contracts, appointments, agreements, awards, favors, negotiations, and other goodies originating in City Hall… and who gets left with the crumbs?

Based on Todd Gloria's history and campaign contributors, the answer is clear: Mr. Gloria is the wrong choice for the mayor's job.

Yes, he seems likable… a winsome kind of guy who packages himself as a gay person of color from an economically disadvantaged background and ethnic mix: 50% Alaskan tribal/native American, 25% Filipino, a tad Dutch, and a touch Latino/ Puerto Rican... in other words, a politician for the underdog, a man for all seasons and occasions.

If all things were equal between Barbara Bry and Todd Gloria, it's tempting to think that San Diego might score a few points by electing the city's first gay mayor—a guy who talks a lot about sexy streets and transforming San Diego into a world-class city.

But all things... ability, integrity, management skills... are not equal between these two candidates.  Todd Gloria's political record, associates, and financial backers paint an explicit picture of a politician who's been co-opted by our city's pack of alpha dogs.  Identity labels notwithsatanding--Todd Gloria is the wrong choice for San Diego mayor.

If you want to know what to expect from a candidate who's been embraced and groomed by the alpha dogs of San Diego, just follow the money.  Mr. Gloria's list of campaign contributors reads like a who's- who of our city's entrenched guard:

Yes, money talks.  It repeats loud and clear that Todd Gloria is the wrong choice for mayor.  The volume gets turned up even louder by contributions from "independent expenditure" PACS like these

Not yet convinced that Todd Gloria is the wrong choice for the mayor's job?  Then consider his eight-year stint on the city council (2008-2016) and the decisions he made that were pockmarked by bad judgement, incompetence, pandering, abuse of power, behind-the-scenes manipulation, and overreach:

➽ re. Sempra Energy headquarters (101 Ash Street): At this very moment Mr. Gloria is on the hot seat, struggling to justify his starring role as council cheerleader for the disastrous, maybe corrupt plan spearheaded by Mayor Faulconer (with complicit thumbs-up from City Attorney Jan Goldsmith) to purchase this property: bad judgement? incompetence?

➽ re. Balboa Park: As councilmember for that district, Mr. Gloria a) played cheerleader for a community-reviled plan to construct a bypass bridge and city-financed paid parking lot in the Park; b) negligently withdrew supervision of the newly-created Balboa Park Conservancy, leaving it to sputter and languish; c) wasted $3 million of public funds on a sole-source contract for the Balboa Park Centennial Celebration.  Despite promoting it as a spectacular citywide festival, he never got it off the ground: just plain incompetence?

➽ re. Mr. Gloria's unethical pressure (according to court documents) on a city planner to doctor findings on a hotly-disputed expansion of a private religious school Academy of our Lady of Peace, which cost the city more than half a million dollars in legal settlement fees: more behind-the-scenes manipulation?

➽ re. full-throated support for the city to fund a third phase of the Convention Center expansion, even though the city was still financially on the hook, still paying for the previous expansion: bad judgement? pandering? 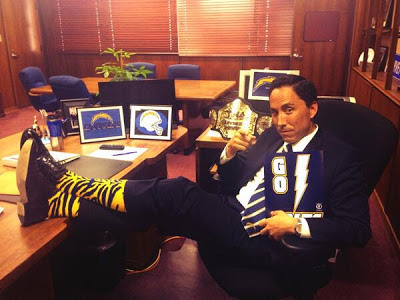 Now consider his record during the six-months he performed the role of interim mayor:

➽ re. his attempt to reorganize city government by hiring an "efficiency expert" (Stephen Goldsmith) who specialized in the privatization of public services and the sale of city business functions to the private sector: abuse of power? behind-the-scenes manipulation? overreach?

➽ re. his unwarranted action to eliminate a stop-use order slapped on a North Park Jack in the Box for zoning code violations, rejecting a community outcry: pandering? abuse of power? overreach?

➽ re. his decision to defund a program to keep emergency shelters open year-round, impeding the city's ability to provide emergency shelters as needed (and contributing to the death toll taken by a Hepatitis A outbreak among the homeless population just a few years later): bad judgment? incompetence?

➽ re. his (self-protective?) decree to automatically delete and destroy city emails older than one year (a new administration reversed this order): bad judgment? abuse of power? behind-the-scenes manipulation? overreach? 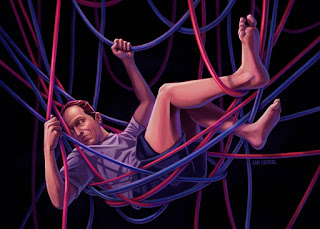 These examples of political bad judgement, incompetence, pandering, abuse of power, behind-the-scenes manipulation, and overreach tell a tangled tale--one that does not deserve an encore.

Not long ago I made a practical suggestion: forget the fancy stuff... the bells and whistles... the silly-talk about sexy streets and world-class status.

With the right mayor in office we could see real progress toward meeting the needs of our neighborhoods and residents and securing a stable future for the city.

Barbara Bry is the candidate who meets the criteria for:  competence✔  stability✔  independence✔  trustworthiness✔ responsibility✔  knowledgeability✔ honorability✔  integrity✔  and a dependable moral compass✔

There's no getting around it: Barbara Bry is the best choice for San Diego's next mayor.
Posted by ndamashek@ucsd.edu at 9:48 PM

The 2020 race for San Diego mayor: A Tragicomedy in Two Acts

ACT I: A Cautionary Tale About What a Mayor's Negligence, Lack of Independence, Inept Management, and Behind-the-Scenes Manipulation Can Do to a City 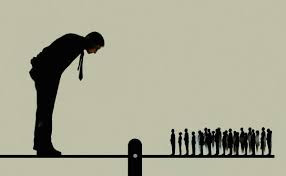 We can start by noticing that "politics" is simply the exercise of power that determines who gets what, when, and how.

It means that on election day, either Barbara Bry or Todd Gloria will be handed the power to determine which beneficiaries will prosper (for decades to come) from the policies, decisions, contracts, agreements, awards, favors, negotiations, and other goodies originating in City Hall.

So before we decide which candidate deserves the political power to determine who gets what, when, and how, we might want to know which one can be trusted to take the interests of the public seriously enough to place it ahead of all others.
And of course we need to be sure about which candidate has the ability and integrity to successfully oversee and manage our deteriorating, problem-plagued city.

These are not frivolous questions.  Ever since San Diego traded in its flawed "city manager" form of government for an equally problematic "strong mayor" system, we've seen a steady decline in government oversight, services, maintenance, management, accountability, and problem-solving.

But let's not jump to conclusions.  The devil doesn't necessarily dwell in the system but in the capabilities, integrity, and trustworthiness of the people we elect.

A bit of history: The city's strong mayor system went into effect in 2004, the year Dick Murphy was reelected mayor.  San Diego was on the brink of bankruptcy as a result of a notorious scheme concocted a few years earlier to grossly underfund our municipal employee pension system (and simultaneously boost salaries and pension benefits).  To give the illusion of a balanced budget, city officials cooked the books.
Another historic note: this disastrous imbroglio was set in motion under the old city manager system.  It was designed and implemented with the blessings of San Diego's wizard city manager Jack McGrory... and christened by then-city attorney John Witt, and after him, Casey Gwinn.

Mayor Murphy resigned within a year of his reelection and was replaced in a special election by Jerry Sanders.

Ex-police chief Sanders originally opposed the strong mayor option.  He characterized it as "a power grab by inside players who would drain public services…to subsidize powerful developers."  He predicted it "would reduce accountability of your elected officials."

But Jerry Sanders--a man of flexible principles--changed his tune once San Diego's "inside players" and "powerful developers" joined forces to make him mayor.  Mayor Sanders became the mouthpiece for retaining the strong mayor system, declaring it was the best way to bring accountability and checks and balances to city government and prevent future financial debacles.

Despite his sterling credentials as a public relations professional, this mayor created a new image for San Diego--a poster child for bad planning and incompetent (... corrupt?) city governance. 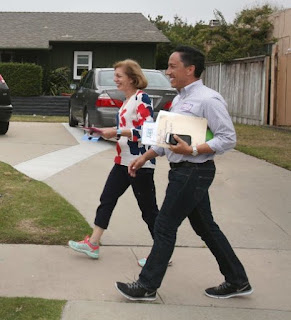 Kevin Faulconer leaves a load of nasty baggage for his successor mayor to clean up, no matter which one it will be.
Here's a sample of what it looks like:

·   ➽ Over the past decade more than $220 million of public funds were paid out for claims and lawsuits (over 20,000 of them) against the city due to broken sidewalks, water main breaks, police misconduct,  poorly trained employees using city vehicles…

· ➽ Unspeakable incompetence in managing the hepatitis epidemic that swept through the city's homeless population, leaving over 400 hospitalized and 20 dead

·  ➽  A city budget on the hook for an annual payment to the municipal employee pension plan of $365.5 million--up from $280 million the year Faulconer took over the city

·  ➽ Greater untold millions paid out on a contract to outfit the city with  smart street lights , so plague-ridden by mismanagement, cost overruns, maintenance problems, and deceptive practices that it had to be rescinded and completely overhauled 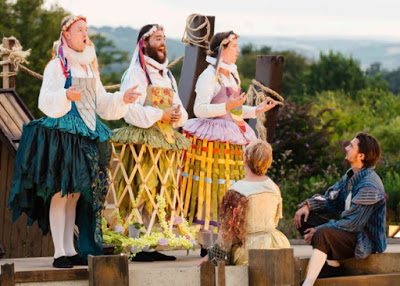 As the curtain falls on Act I of this municipal tragicomedy, keep in mind that the outcome of a mayor's negligence, lack of independence, inept management, and behind-the-scenes manipulation is bad... very bad... for all of us.
Will the next mayor we elect be smart and independent enough to break the mold?
The curtain goes up on Act II after a short intermission.
Posted by ndamashek@ucsd.edu at 4:42 PM