A mindful walk through the mayor's office 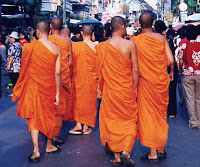 Turns out that mindful walks aren’t guaranteed to be soul-soothing.  But one thing’s for sure -- they’re invariably eye-opening.  Once you start noticing, you’ll find plenty of things you never noticed before.

You'll remember that last week I walked the walk in La Jolla.  A few days ago it was Mission Valley.  Yesterday it was downtown.  But I’m putting aside downtown and Mission Valley for the time being and inviting you to keep me company on today's mindful walk... through the mayor’s office... figuratively speaking, that is.

Picture us on the 11th floor of City Hall.  Take a seat alongside me in the outer vestibule of the mayor’s suite.  Notice the elevators and toilets to our left.  Notice the worn carpeting and sullen lighting.  Now follow me into the inner sanctum.

Be mindful how you walk.

Inside you’ll notice a brightly-lit chamber 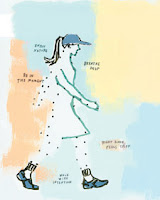 I took a mindful walk through downtown La Jolla this morning.  It was my version of a meditative exercise that’s supposed to smooth your soul and clear your mind.  Here’s how it’s done: you put one foot in front of the other in the usual way of walking while you notice what's around you.

First you notice.  And then you let it go.
Notice…and let it go.

These are some of the things I noticed on my mindful walk:
•    marred and scarred sidewalks; cracked and fissured streets (the touted La Jolla Village patina?)
•    cheerful tourists snapping photos of one another and guessing the name of those lavender-blooming trees (jacaranda)
•    scores of cormorants, pelicans, and raucous sea lions lolling, diving, swimming, and engaged in uninhibited large-bowel activity on the LJ Cove bluffs, in flip-off contempt of microbial scrubdown experiments
•    June gloom
•    signage announcing a new-to-the-neighborhood Goodwill resale shop just a few storefronts down from Roche Bobois
•    a surge of remodels and dense multi-family construction
•    dozens of homeless men and women, some on benches, some hauling loaded carts in the direction of the Vons recycling depot

I also noticed that the noticing part of a mindful walk is easy.  The letting go part is another story.  And I’ve noticed that it’s not just me who has trouble letting go.

Take the U-T San Diego, for example.  I’ve noticed that since Bob Filner became mayor the people at the U-T started acting act like crazed dogs, compulsively gnawing at old bones and obsessing about the mayor’s personality quirks.  They publish half-stories that omit core information a reader needs to get a full picture.  Their editor tears his hair out

Her NumbersRunner commentaries have received multiple awards from the