It's enough to make you cringe, the way they toy with our mayor – those brawny Chargers/ Rams/ Raiders sports team owners, our insatiable hotel magnates, those downtown real estate purveyors, our Chamber of Commerce henchmen.  So many entitled guys diddling with our small-time politicians just for the fun of it, passing the time until they clinch their publicly-subsidized, taxpayer-financed killer deals.

But our mayor is a goodnatured sport.  He wears his what-me-worry grin even when he's left flapping in the breeze, flailing like wet underwear strung up on the clothesline to dry.  One minute limp and aimless.  The next minute puffed up and billowing like a hot-air facsimile of a political contender hoping to score in big-boy Republican Party politics.

If presidential candidate Bernie Sanders is right about our country’s soul being captured by  mega-rich plutocrats bent on controlling the nation's politics and economy, these megalomaniacs must have done their internships in San Diego.

Throughout much of our city's history we've been in thrall to a cadre of interlocking big-business elites who manipulate government policy and political leadership with impunity.  It's so ingrained, it passes for normal in this big/small town of ours.

It's why someone as inconsequential and vacuous as mayor Kevin Faulconer – a man whose landmark accomplishment as a city councilmember was preserving beach fire pits – can posture as a big-city politician with no pushback from the public.  It's why he's able to run unopposed for another term in office (the local Democratic Party has a lot to answer for on this front, I'd say).

It's why someone as lightweight and ineffectual as this public-relations-trained mayor is testing the waters for governorship of the entire state of California (ludicrous and insulting, I'd say).

It's why mayor Faulconer was a no-show at  SANDAG's regional planning meeting this month when he should have been there to vocally lobby hard and fierce for transit funding to back up his posturing over a strong climate action plan for the city (put your money where your mouth is, I'd say).

It's why our mayor was listed as a speaker at the recent ALEC conference held in San Diego.
To refresh your memory: ALEC is the American Legislative Exchange Council, a Koch brothers/tobacco industry funded conservative conglomerate of legislators and corporate lobbyists who create and promote model bills and resolutions that advance "free-enterprise" objectives like minimizing corporate regulation, reducing taxation, loosening environmental regulations, tightening voter ID rules, weakening labor unions, and promoting gun rights (notice that for San Diego constituents Faulconer hides behind a sun-kissed, politically moderate mask – a man for all seasons and political preferences.  A cynical deception, I'd say).

Bottom line: maybe we shouldn't be feeling sorry for poor mayor Faulconer, after all. 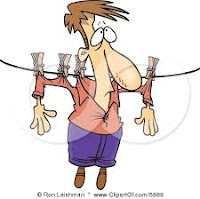 Maybe we should be feeling more compassion and indignation for ourselves,  the regular people of San Diego: residents and community activists, neighbors and civic caretakers, voters and grass roots reformers.  We're the ones who've been hung out to dry by many of the officials we elect.  And by the people they answer to.

Think about this: over ten years ago our City Charter was drastically amended to beef up the status of the mayor from head honcho of the city council to chief executive officer of the entire city.

This "strong mayor" amendment was sold to voters with a promise that San Diegans would henceforth know where the buck stops.  The new "strong mayor" – not some appointed city manager – would be accountable for running the city, for getting the people's work done, for snapping the whip over city departments, for delivering efficiency and excellent performance, for serving the public good.

True to its word, the "strong mayor" amendment freed the mayor from the city council.  Mayor Kevin Faulconer (already attached at the hip to his horse whisperer, ex-strong mayor Jerry Sanders) came into office with considerably more political power – at least on paper – than old-timers like Frank Curran, Pete Wilson, Roger Hedgecock, Maureen O’Connor, Susan Golding, and Dick Murphy, all of whom served as mayor under the bygone city manager form of government.

But the City Charter "strong mayor" amendment failed to free the mayor from the professional manipulators and ventriloquists who comprise San Diego's ruling junta and who operate under a seemingly irrevocable, never-expiring private contract to use city government for their exclusive financial games and gains.

A requirement for courage, integrity, independence, and intelligent leadership in San Diego's political arena – that's the only City Charter amendment we really need.  I'm not necessarily a Bernie Sanders acolyte, but the public benefit of a small political revolution in San Diego is pretty obvious.  I'd say.

Posted by ndamashek@ucsd.edu at 6:08 PM