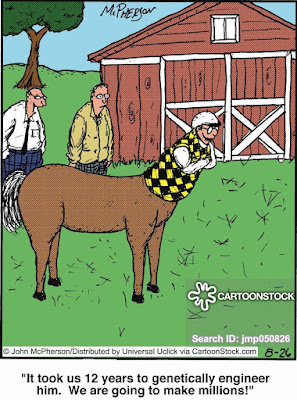 We know how it’s played at the Del Mar racetrack.  There are winners.  There are losers.  It’s a brutal ordeal for the horses but there's a hefty payoff in the offing for a certain percentage of track regulars.

City politics has a lot in common with horse racing.   But while it takes years of selective breeding and training to produce a winning horse, a winning candidate can be created through selective inbreeding, deft maneuvering, and discrete fingers on the scale.
To illustrate what this means in real time, consider the jarring juxtaposition of two seemingly unrelated stories that appeared this month in the news--practically on the same day.  Read them separately and you get a hint of the embedded gentleman’s agreement that controls San Diego civic life.
View them side by side and you begin to understand that to reform the flimflam politics and vacuous leadership that permeate daily life in America’s Finest City, we need to be more blunt about naming the embedded fixers and paying closer attention to their methods.
Today's story revisits the 1984 San Ysidro massacre.  Tomorrow's story revisits the Bob Filner trauma.
Story #1: San Ysidro Remembers the 35th Anniversary of the McDonald’s Massacre
Yes, many of us remember that horrific day on July 18, 1984 when a single gunman had the luxury of spending one hour and 17 minutes in a shooting spree that killed 21 people (adults, teenagers, children, and an 8-month old baby) and wounded 17 others before he, himself, was killed by a San Diego Police sniper with a single shot to the chest.
There was a police review.  But many questions about the way the San Diego Police responded to this emergency went unanswered.  The overriding question--how come it took 77 minutes before a SWAT team sharpshooter was given permission to do his job?—managed to slip through the cracks.
Who was the featured player in the San Ysidro story (second only to the psychopathic gunman)?  It was San Diego’s former mayor Jerry Sanders.
The official storyline goes something like this: on a sunny Sunday afternoon, while scores of San Ysidro residents were being terrorized by a lone and vicious gunman, the Commander of the San Diego SWAT team— Police Lieutenant Jerry Sanders----was relaxing over a beer (or two or three) at the beach in Mission Bay.  It was the end of a daylong Command Staff retreat.  The deputy police chief (Norm Stamper) approached Sanders to inform him about what was happening in San Ysidro.
The official story says that while Lieut. Sanders was enroute to San Ysidro and stuck in heavy rush hour traffic, he made the sober decision to deny permission to the police snipers--who were poised for action on the scene--to shoot the killer who was shooting customers trapped in McDonald's. 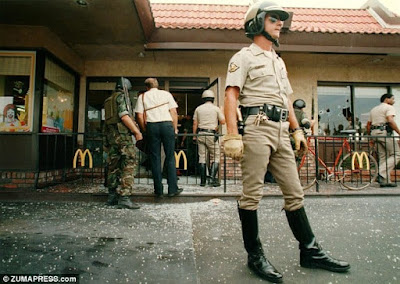 The official story says that not until he arrived at the scene more than an agonizing hour after the shooting started did Sanders personally give the green light for his SWAT sniper to shoot and put an end to the horrific mass killing.
The official story concludes with Sanders taking a road trip around the country to share with others his wisdom about this ordeal.  Summing up the lessons to be learned from this violent tragedy, Sanders offered his four keys to good leadership:
➜➜➜➜A semi-official film documentary of the San Ysidro ordeal was created by Charlie Minn.  It's called  “77 Minutes.”   Watch this video.  It's well worth your time and attention.⬅⬅⬅⬅

The unofficial storyline goes something like this: Lieut. Sanders was most likely inebriated at the time of the shootings.  He was not carrying his beeper and was therefore unreachable at the onset of this emergency.  Twenty-five minutes of murderous activity and terror elapsed before the deputy police chief was able to locate him to give him the news.
The unofficial story reports that SWAT team members were in attendance at the Command Staff retreat on Mission Bay.  They were unable to deploy their armored vehicle because it required two keys to operate it and, somehow, the backup key had been "misplaced."
The story goes on to say that Lieut. Sanders scurried home to retrieve the key, don his uniform, and finally get on the road.
The story also relates that—still enroute to San Ysidro--Lieut. Sanders reversed the order of a field commander already at the scene to let sharpshooters take down the murderous shooter.  It says that Lieut. Sanders chose to deny permission  to his field commander and wait until he, himself, could make his entrance at the scene and personally give the order.
The official story informs us that--despite his impaired and supremely questionable judgment, and despite 13 subsequent refusals by the Police Department to promote him--Jerry Sanders was subsequently hand-picked in 1993 by city manager Jack McGrory (and confirmed by Mayor Susan Golding and the City Council) to be the city’s new Police Chief.
The story tells us that by 1999 Jerry Sanders was appointed President and CEO of the United Way.  In 2002 he was appointed Chairman of the Board of the Red Cross.  By 2005 he moved into the mayor’s seat.  After terming out as mayor he was awarded the position of President and CEO of the SD Regional Chamber of Commerce, a post he still holds.
It’s a quintessential San Diego story of how a less-than-ordinary, establishment-protected good old boy--a regular guy who knows how to set the tone and take good care of his team--gets passed off as a thoroughbred and wrapped in cotton batting to keep him cozy and secure in his waning years. 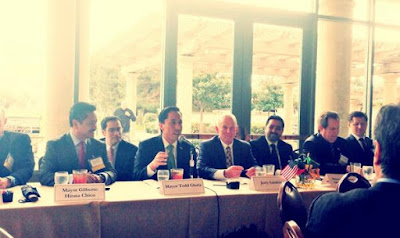 But don’t be lulled into thinking that the protected status of Jerry Sanders is a one-of-a-kind shaggy dog story.

There’s much to be written about how other anointed, favored, protected, less-than-ordinary good old boys make it big in San Diego.  Just take a clear-eyed look at current mayor Kevin Faulconer--the Sanders heir and protege.

And try not to be too starry-eyed about another anointed, protected, favored guy currently chomping at the bit--mayoral hopeful Todd Gloria.  He's a different type of pony, maybe, but he's been brought to you the same old San Diego way, via: selective inbreeding, deft maneuvering, and discrete fingers on the scale.


The official San Ysidro story has no bright ending.  All these years later and there've been no satisfactory or substantive changes to citizen oversight of Police practices and performance.  It's still under discussion at City Hall.
(see Story #2, next...)

Posted by ndamashek@ucsd.edu at 2:20 PM